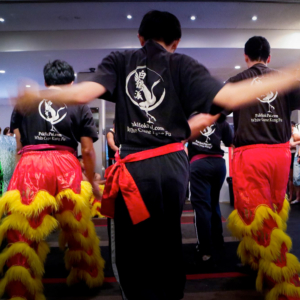 The Origins of Pak Hok Pai

The founder of Pak Hok (White Crane Kung Fu) was the Reverend Tibetan Monk ADATO, born in AD 1426 at the beginning of Hsin Chung’s reign in the Ming Dynasty.

Adato’s ancestors were Nomads based in Yuk Shu County of Ching Hoi Province. Adato became versatile in the hand seizing fist techniques taught by his tribe, and soon after the tribe emmigrated to Tibet. Adato acquired the art of Tibetan wrestling from his master Gongut. It was in Tibet that Adato was cloistered and ordained a monk. Soon after, Adato learned some unusual hypnotic martial arts techniques (DINAH) from an old master from Tabli.

During the deep meditations that are part of a monk’ s education, Adato witnessed the swift, evasive animal manoeuvres and precision attacks between a crane and an ape in physical combat. His observations ultimately formed the foundation of the White Crane Kung Fu system.

From watching both the ape and crane’s technique, the symbolic number eight was used to establish eight fists, stances, fingers, palming, kicking and seizing. This was the foundation upon which the “Lion-Roar” was based.

The name “Lion’s-Roar” is based upon the Buddhist teachings describing, “Sounds that shake the earth are like the lion’s roar” (Rapid Journal p. 18). The “Lion’s-Roar” was a symbolic name given to signify the birth and creation of something significant. “Lion’s Roar” was subsequently changed to Pak Hok Chung by Dologutan, more befitting to the title Pak Hok (White Crane). During the Ching Dynasty, there were 10 imperial guards in the palace. Two were Lamas of the Pak Hok origin.

Non-traditional Chinese marital arts schools were generally not accepted into the Association. These traditional tournaments started in 1979 and ended in 1988 when Si Gung Ma resigned as President. One of our main exponents was Warren Chan, the son of Mr Chan Hak Fu. Warren has won many titles and has also made a number of movies to his credit. One noted movie “FEI HOK” (Flying Crane) featured Chan Hak Fu performing Tit Lin (Iron Chain Form).

In 1982, the 6th World Martial Arts competition was held in Hong Kong. This tournament was held every four years in a different country. Nominated traditional Kung Fu schools in Australia picked the one student who had the greatest potential. At that time Kerry Cox represented Australia in Hong Kong. He fought well and came second in the final. Overall the Australian team did well coming home with two wins and one second.

Today Si Fu Santa Maria has established a branch in Campbelltown at Our Lady of Mount Carmel Parish Hall.  Our aim here is to give the people in the community a chance to appreciate and understand the teaching and philosophy behind Pak Hok Pai.

The Campbelltown division has performed lion dancing and martial arts demonstrations at many different events such as the Fisher’s Ghost Festival, school fetes, Chinese New Year, and many other charitable events.

Lion dancing skills have also rapidly developed. Having performed for local restaurants during the August Moon Cake Festival and Chinese New Year. In the past, the Nan Tien Temple (the biggest Buddhist temple in the southern hemisphere) has asked us to perform during these special occasions including the Buddha’s birthday.

If it was not for the hard work of Si Gung Ma and Si Fu Santa Maria we would not be here today, both taking an active role in Pak Hok Pai since its inception by Chan Hak Fu in 1972. Words will never be enough to explain their commitment to the school. In their heart, all that they aim to do is keep the spirit of Pak Hok Pai alive.